The last Amtrak train (southbound Ethan Allen) at Saratoga Springs on March 26th 2020, due to the pandemic service suspension.

"The coronavirus has taken the public out of public transportation. At its height, the pandemic turned crowded commuter trains traversing urban centers into giant, virology test tubes on wheels. Once the pestilence has subsided, there is no guarantee that Americans will readily put aside their infection fears and answer the conductor’s call of “all aboard.” That means major upgrades for the nation’s railways, in accordance with Joe Biden’s dream of a “second great railroad revolution,” may wind up sidetracked.

"Although daily deaths in New York, thankfully, have fallen to single digits, rail ridership shows no signs of recovery. For the week ending Sunday, ridership on both the city subway system and the Long Island Railroad was down 76% from the same week in 2019, according to Metropolitan Transit Authority (MTA) data. Manhattan bridge and tunnel traffic were only off 14%, though, an obvious indication that commuters feel safer from germs riding solo in their own autos.

"Beyond intra-city commuting, the number of passengers riding long-distance along Amtrak’s Northeast Corridor fell by 95% during the height of the pandemic and remains 90% below normal. With Amtrak ridership across the country down 70%, the federally funded rail service has announced the termination of service to hundreds of stations and plans to lay off 20% of its work force.

"In March, Congress approved $25 billion in bailout funds for public transit systems like the MTA and Amtrak, and collectively they are seeking at least an additional $32 billion to make up for lost revenue. The multibillion-dollar question is whether in the post-pandemic world those missing fares will pour back into transportation industry coffers, justifying additional taxpayer assistance. It doesn’t look promising."

OK, as rail advocates, we have been seeing over the past months versions of this anti-rail argument printed recently in the Washington Times – a deeply conservative newspaper – stating that the plans proposed to build up America’s public transit and passenger rail infrastructure and services by former-VP Joe Biden and others are unworkable because of the plunge in ridership during the ongoing COVID-19 pandemic. The train is dead because in the future everyone is going to drive a private car or work from home with their groceries ordered and delivored by Amazon.

While it’s true that passenger rail and public transit ridership has taken a big hit in the still ON GOING pandemic, but its hardly unique in the ongoing collpase in travel demand. And yes, while public transit got $25 billion in aide from the federal government, the airlines have gotten $50 billion in payroll support and low-interest loans – despite having far few daily passengers then public transit – with as of this writing in early August Republican senators in the US Congress are seeking another $25 billion in airline aid. According to this August 5th article in the New York Times: "With air travel down about 75 percent compared with last year and with coronavirus cases widespread, airlines are losing millions of dollars a day as they seek to survive what is expected to be a yearslong, choppy recovery."

The logic of the opinion piece in the Washington Times if apllied to current airline ridership would suggest that we should greatly doubt the wisdom of future federal and state investments in airport infrastructure as well. Please also note that as of the end of July, the rideshare companies Lyft and Uber have seen ridership dropping between 70% and 80%. And what about the future of cinemas, theatres, restaurants, and bars? Consider that according to the New York Times hotel occupancy nationally as of the end July is only 48.1%, not good news for what had been one of the fastest growing parts of the US economy.

We now know that given the number of COVID-19 super-spreader events traced to churches, bars, and house parties that the virus spreads very rapidly in crowded indoor places. Despite this, no outbreak ("Is the Subway Risky? It May Be Safer Than You Think" New York Times, August 2nd 2020) in America has been traced to a bus, subway car, taxi, or jetliner. They do spread the pandemic by moving infected people across continents, nations, and towns; but they are in themselves not as dangerous for spreading infection as restaurants, bars, churches, and house parties. Based on the logic at work in the argument being made by the Washington Times against public transportation, Americans in 2030 will also still be drinking alone at home watching reruns on Netflix.

The Washington Times did not add to the creditability of its arguement by quoting in its opinion piece a study by anti-rail/transit gadfly Randal O’Toole of the Cato Institute, whose arguements against rail are often include dubious use of statistics and outright canards. Mr. O’Toole stated in an August 21, 2012 article in the Christian Science Monitor that:

"The problem with Obama's high-speed rail is that it's an obsolete technology that doesn't make sense today… High-speed rail was successful in Japan because at the time it was developed only 12 percent of Japanese were driving," he says. "It makes no sense today when cars go where you want to go when you want to go. Just because other countries built this and are driving themselves into bankruptcy doesn't mean we should.”

A quick Google search will show that by the time the Tōkaidō Shinkansen the world's first high-speed railway opened just before the 1964 Summer Olympics in Tokyo, that Japan had already a competitive domestic airline service, had built its first expressways, and its car manufacturers were not just exporting automobiles, but building factories overseas. The Shinkansen “Bullet Train” was attacked in the Japanese media of the time before its opening as a “white elephant”, but such criticism fell off as the ridership of the Tōkaidō Shinkansen soared from the intial 11 million annual passengers, reaching 174 million in FY2018. Intercity rail ridership in Japan – a nation in length comparable to California, Oregon, and Washington State – is higher than air travel because of the nation's extensive high-speed rail system. And it’s not just Japan; Britain’s West Coast Mainline carries more intercity passengers than the entire Amtrak system, with high ridership seenalso on the modern intercity rail systems of dozens of nations from Morocco to Malaysia, South Korea to Sweden.

FROM: "Railway in Sweden and Japan – a comparative study"; page 39

Often rail antagonists like Mr. O’Toole will present statistics from which they will argue that since high-speed rail ridership is only a tiny percentage of all domestic travel in France or Japan compared to personal automobiles, that it’s a poor investment.

"Since most high-speed rail stations will be in downtowns, the main users will be downtown workers such as lawyers, bankers, and government officials. Yet less than 8% of American jobs are in central city downtowns, meaning all Americans will subsidize trains used by only a small urban elite… High-speed trains in Europe and Asia may be a boon to American tourists, but they haven't proved transformational in those regions either. France and Japan have the world's most extensive high-speed rail networks, yet their average residents ride the high-speed trains less than 400 miles a year." — Randal O’Toole from the 2010 opinion piece “We can't afford the luxury of high-speed rail” in the USA Today

Yet this is comparing apples with oranges, since most travel and most private car use is for local trips, while intercity trains are for long-distance trips, not your daily commute or run for milk. When the modal transport split comparison is based on distance, you find that overseas modern passenger rail services dominate for trips between large cities for distances of 100 to 400 miles. High Speed Rail has also be observed to increase overall travel through "induced demand", with a third of riders of the French TGV Sud-Est being passengers who would have not made the trip before the high speed train. The fact that the average Frenchman only rides the TGV once or twice a year, is as valid an argument against high speed rail as it is against investing in air travel, which most people only utilized a few times year as well. Not many people make a daily commute onboard a Boeing 737. 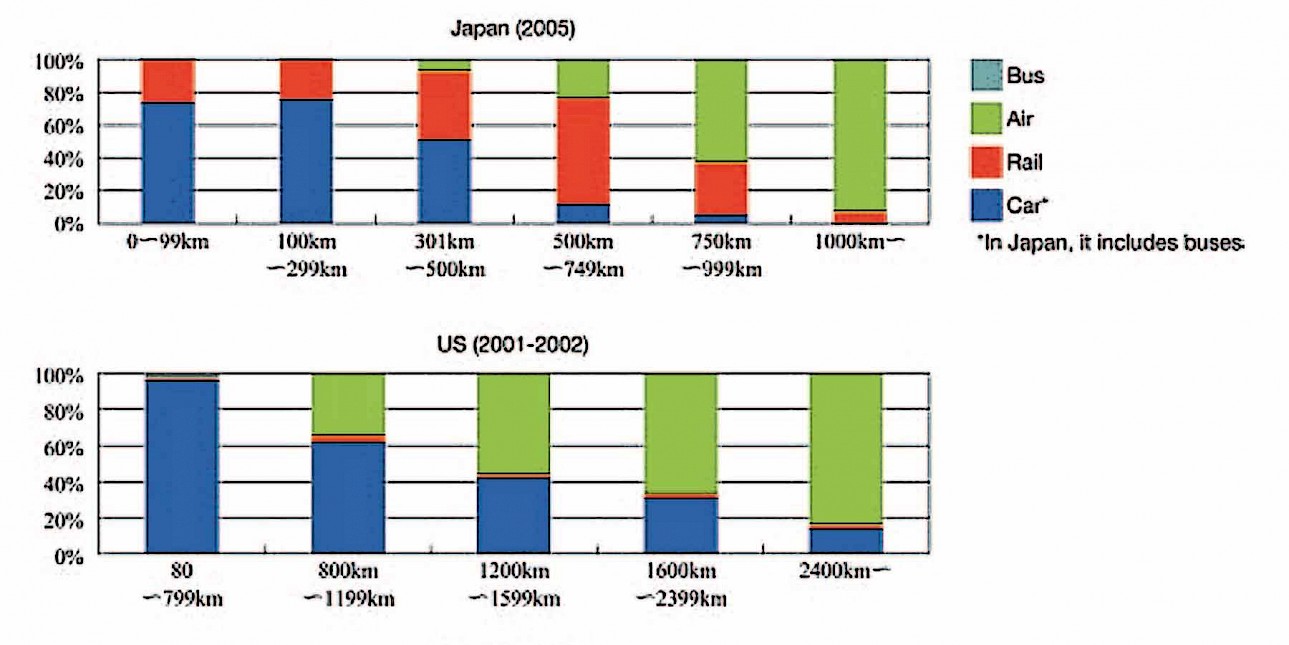 FROM: "Intercity Transport Policy and Planning System: International Comparison Between the EU, USA, China and Japan"

And the argument that because wealthier people will be the patronizing passenger rail far more than the working class its a unfair use of public tax dollars, is also one that can be made against public investment in air travel. Its ironic that some will argue that tax cuts for corporations and the wealthy are a great public good, because the benefits will trickle down to the poorer masses by providing employment, yet then piously state that public investment in transportation infrastructure is unfair to the working-class because the wealthier individuals will be the biggest users. With the collapse of travel industry from the COVID-19 we now have real-life data and personal stories on just how many jobs of middle- and working-class folk are dependent on the travel and leisure industries, with unemployment in the USA as of the beginning of August rivaling that of the Great Depression of the 1930s.

Valid intellectual arguments against rail based on sound logic, factual information, and an honest presentation of statistics can be made, but too often the rail critics quoted in the press resort to lazy intellectual arguments and outright canards. Mr. O’Toole will argue in one commentary, article, or book that buses are a better investment than rail transit, and then in another argue that buses are no good either, because robot taxis are the future. The fact that critics of passenger rail must resort to such disingenuous arguments against rail seems to indicate that very sound arguments can be made in favor of passenger rail.

Once COVID-19 is over, I think things will largely go back to normal in the daily life of America, just has it did after the Spanish Flu Pandemic of 1917-18. There will undoubtly be some changes, like maybe public spaces will be cleaner and yes more people working from home, instead of commuting to the office. But overall society will return to most of its old daily routines and social/economic structures, including the intensive use of public transit, passenger rail, and airlines. Passenger rail over two centuries has survived war, famine, disease, depression, and technological change – it will survive COVID-19. Some media organizations like the Washington Times and think-tank eggheads like Mr. O'Toole will argue otherwise, but those arguements are just a continuation of a decades-long laissez corperate political campaign – well funded by amoung others the libertarian Koch Brothers – against passenger rail and public transit.

We have seen both at home and overseas elected officals and goverments from both the conservative center-right and liberal center-left support robust investment in passenger rail. We are fortunate in New York State to have such bi-partisian support for a more efficent, convienent, and substainable passenger rail system. With increased urbanization (not many are moving back to the farm or forest) leading to the need to increase transport capacity due to highway traffic congestion; plus the urgent need to reduce dramatically greenhouse gas emissions to roll-back Global Warming, a large public investment in passenger rail is very much needed in United States.